The title of this post would suggest that  I am going to reflect upon three movies, each differing in quality, but I will actually only be discussing two.  When I was a kid, I had the same emotional connection, and joyous thrill from reading Dr. Seuss, as I am sure every child does. The great thing about Dr. Seuss, much like Disney, is it spans so many generations, it becomes a comfort to everyone’s childhood. 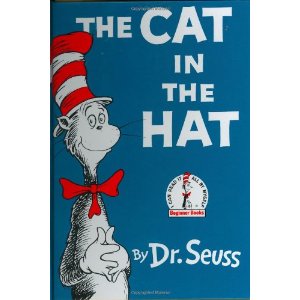 One of my favorite things about pop culture is that it allows us all to connect with one another in familiarity without having anything else in common. One kid may have grown up with an abusive parent that dealt drugs, and another kid had the traditional nuclear family with a doctor father and school teacher mother, who spent thursday nights taking part in “Family Fun Night”.  But if those two meet as adults, and are roughly from the same generation, there is a good chance that they can both reminisce fondly about the characters living in Pee Wee’s playhouse, or how they always cheated when they read the “Name your Adventure” books. It’s a universal warm and fuzzy, that may seem superficial on some level, but is still nice no matter what.

So back to the original point, the film adaptations of Dr. Seuss books that we all loved as children.

The Cat in the Hat may actually be my least favorite movie ever. Since my son loves to watch it, I have to sit through it almost once a day. At least, parts of it anyway.

Now, I am hoping this is a stage, and that my son’s film taste improves greatly. My greatest fear is that my son, at 14, will list his favorite movies as Freddy Got Fingered, Glitter and Jack and Jill. Well, perhaps I am being a bit harsh, he is two and someone has to watch the Cat in the Hat, I suppose.

Why do I hate this 2003 live action version of the classic Seuss book? There’s the hateful vibe, the horrible mugging by Mike Myers, Alec Baldwin and Sean Hayes, the creepy quality of the entire flick, the lack of anything resembling sweet, funny, or charming. There is so much I hate about this movie, I could write a novella. Mike Myers manages to phone this role in by combining every annoying character in his repertoire (Wayne, Shrek, Linda Richmond, the parents from So I Married an Axe Murderer, which is basically just Shrek.) and throws them in a blender to create the cat. I feel like Cat in the Hat deserves so much better than recycled mannerisms. The humor is nonexistent.  For a long time now, Perhaps starting with Toy Story, kid’s movies supply jokes for the kids and enough winking humor for the adults to enjoy. The problem with The Cat in the Hat is that they attempt to do the same thing but it’s mean-spirited and inappropriate. The cat holding a garden hoe and saying “You dirty ho, oh baby you know I didn’t mean to call you that”, is weird and not funny. The Cat in the Hat is a waste of what could have potentially been a great, silly, movie with a whole lot of good clean mischief. In the book, the Cat is annoying, in the movie he’s just a dick.

Now, a good movie made based on a Dr. Seuss story is Horton Hears a Who. An animated film that is visually lovely, and has a fantastic cast. There’s Jim Carrey, Steve Carell, Amy Poehler, Will Arnett, Seth Rogen, the list goes on and on. Immediately adults are in because the cast is a bunch of comedy badasses. But here’s also something great about the movie; it’s sweet, funny and entertaining. It also manages to be funny without being at all inappropriate. There is no reason to work blue, remember I Love Lucy and The Dick Van Dyke Show? Those shows are still hilarious and super clean. Don’t get me wrong, I enjoy certain brands of Vulgar comedy, Kevin Smith and Judd Apatow make some of the funniest movies out there, but there is a time and a place people. I just love Horton, and Morton, and the Mayor and every other character in Horton Hears a Who.

The movie is delightful. If you have children, or even if you don’t have children, you must watch it. I am eagerly awaiting, and hoping that they will make Horton and the Egg.

Anyone else have certain movies that your kids love, but that make you want to throw stuff at the television? I’m assuming I don’t just need anger management classes.