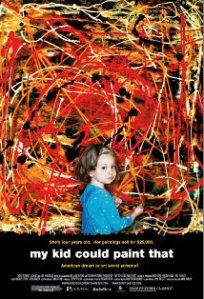 This evening I watched My Kid Could Paint That, a documentary I caught originally in 2007 when it first came out. Watching it again, now having a child of my own, is a much different experience because of the great distaste I have for selling out your own kids.  For those who are not familiar with the film, it follows a four-year old girl named Marla who is categorized as a painting prodigy. The little girl paints these beautifully colorful modern pieces that are very reminiscent of Jackson Pollock. Art critics and buyers are flabbergasted over the talents of this kid, and she is blissfully unaware of the media sensation she has become. After her fame builds, a 60 Minutes expose’ tries to uncover some sort of truth that perhaps it is not really Marla who is painting, but her artist father. There are scenes of her attempting to paint but failing to match those previous masterpieces.

The parents are interesting because the father seems undeniably shady, he has shifty eyes and speaks to the documentarian in a way that he is constantly trying to prove his innocence. The mother, just seems so sad but I cannot tell if she is just scared that someone is questioning the validity of her child’s genius or she actually is in the dark about any potential scam that is created by her husband.

Once the media picks up on the fact that the video footage of Marla painting contains works that are not nearly as polished as her previous work, people start bad-mouthing the family and the people who paid big bucks for the paintings are feeling bamboozled. These people are the same people who claim earlier in the film that these masterpieces would be just as such even if they were not created by a four-year old. In the end, there really isn’t a straight answer on what is really happening.

This film is interesting and I enjoyed it because I find the talents of children fascinating and I am also a big art nerd. Personally, I have a real problem with doing what Marla’s parents did, they made her into a media spectacle. Even the idea of sending in a picture of my son for one of those cute baby contests gives me the creeps. I am just so fiercely protective of him, I can’t see putting him in front of the limelight. There is a girl I have known since we were 12 who has a son that is 7 months older than my boy, and she is constantly finding new ways to exploit him. She is a very desperate individual in general so it is not surprising that she would be such an opportunist when it comes to her child. I just feel that my son should be making the decisions for what he wants to do in life, and since he is not old enough to even choose what he wants, let alone handle the repercussions, I am not going to allow such things for him.

Where is the line? is it reasonable to allow your children to be part of a contest that may win money if that money is intended for something great, like their college education? Marla’s parents claim that all of the money she makes off of her paintings, and that is quite a hefty sum, go directly to a fund for her education but how much is being skimmed off the top? Tell me, my fellow mommies, what are your thoughts on this and what do you consider appropriate for your little one?