Recently I watched two really interesting documentaries, Babies and Nursery University. I am a sucker for a really good socially relevant documentary and there are, what seems like, an innumerable amount on my Netflix que.

The first one was Babies, this was a documentary from this year that features one year in the life of four babies from different parts of the world, Mongolia to Namibia to San Francisco to Tokyo. This movie is interesting because it isn’t really a typical documentary in the way that we have gotten used to. There is no real dialogue, narration or information presented to the audience about the subjects. It really is just 80 odd minutes of babies doing cute baby things. Most people would get really bored with this movie within the first 10 minutes, but I managed to make it through the entire flick because I just love me some babies. They are a fascinating bunch and they always do cute things. Since I am 7 months pregnant, that could have been another aspect of my emotional interest. My 14 month old son loved it, but he LOVES babies, I mean he loves them to the tips of his fingers. He also loves animals, and there are plenty of scenes where the babies are being surrounded by animals. Something I found interesting about my son; he showed no interest in the little white baby from San Fransisco but was obsessed with the Mongolian and African babies.  As a white baby himself, maybe he found the more ethnically diverse babies a tad more interesting. 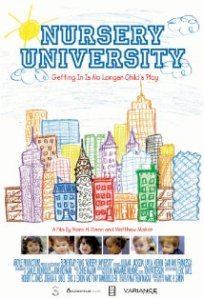 The other movie I watched was Nursery University from 2008. This one tells the story of five families that try to get their toddlers into the best pre-schools in New York. This movie seemed almost ridiculous because of the way people treat getting into a certain prestigious pre-school with more fervor and motivation than getting into law school. The thing that the parents fail to recognize is how little their child actually cares about any of it. There are long application processes, interviews, lotteries, meet and greets all in preparation to send these three-year olds to a school that cost 15 grand a semester. What the hell are they making the finger paint out of  in order for it to cost that much to attend? The kids are darling, the parents are nuts and the directors of the nursery schools are completely aware of how little of an affect a certain pre-school has on a child eventually getting into an ivy league. I thought this movie was totally entertaining and will probably watch it again when my little boy is old enough for pre-school. I am adamant about moving from my current town that has a pitiful school system by the time my boy is old enough for grade school, but to put so much emphasis on a private nursery school seems unnecessary.

Both flicks were entertaining, after seeing Babies once, I’m over it but I will definitely be watching Nursery University again for the train wreck of it all.